The philosophy behind the cycle of the twelve symphonies 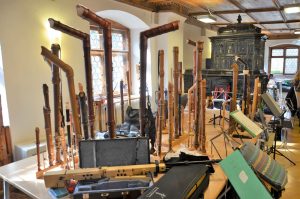 For a number of reasons, the years in which the recorder fell somewhat into the shadows and those which saw flowering of the symphony are roughly similar. Obviously this means that the exciting orchestral forms which characterised the late classical, romantic and early twentieth century periods have simply not been accessible to recorder players. However in the late years of the twentieth century the development of the recorder orchestra, due to the work of a few pioneering composers and conductors, and the increasing availability of the larger bass recorders meant that many new possibilities arose for writing for a new ensemble.

This was the position that formed the background for my symphony project. I originally thought of making arrangements of standard symphonic repertoire; this has been done with varying degrees of success. However all instruments have their own idiosyncrasies and I realised that there were very few pieces in the standard repertoire that suited the recorder orchestra completely. Either the very wide range of melodies or specific string textures or extreme weight of tone always meant that there would be shortcomings in arrangements of whole symphonies. In fact if this was not the case, any piece that was being arranged would not really be making the most of the resources available to the composer. In a well-written piece the character of the instrument for which the music is written is as important as the notes which are written and both are conceived at the same time.

So for me the challenge was to write music which was idiomatic for the recorder, and I do not necessarily mean easy(!), while using material which would be usable within traditional symphonic forms; to imagine how I would have written had I been alive at a different time in a different country, or indeed how certain composers would have written for the recorder orchestra had it been available to them. And in so doing, to plug a hole or provide a prequel to the recorder orchestra pieces being written by myself and others today.

The textures in these twelve symphonies are very much related to symphony orchestra textures rather than a development of recorder consort textures and they are all very firmly, both in overall structure and the forms used in the movements, rooted in the periods and countries in which they are conceived. 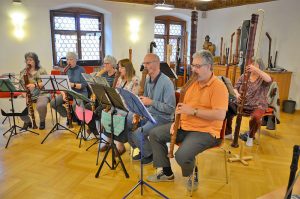 The unusual combination of elements in these symphonies makes them very difficult to categorise. It is in some ways easier to say what they are not than what they are. They are not pastiche, they are certainly not cutting-edge, other than the way in which the recorder orchestra is handled. I like to write tunes and harmonies that touch people. Within the pages there is some very difficult writing, not much but it is there, yet the overall effect is not of a virtuoso piece. The aim of each performance is to create a balanced sound world, not leave the audience with an impression of how good any individual player is. The music is more important than the individual player and the whole orchestra tells the story and is the star of a performance.

What I hope is that they are exciting and enjoyable to play and listen to and are gateway for recorder players to experience the excitement that orchestral players take for granted when performing the big symphonies of the years in which the recorder was not in the foreground of general musical appreciation.

Details and sound files for all of my symphonies are here. 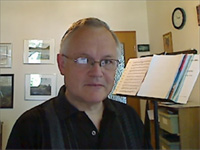